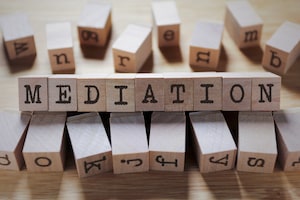 Alternative dispute resolution (ADR), typically mediation or arbitration, is being used more frequently to help divorcing couples hammer out agreements on everything from custody and parenting schedules to property distribution. Some states require parties to go through an ADR process before resorting to a formal trial. The intent is to encourage a mutual settlement.

For example, New Jersey requires divorcing couples to file paperwork acknowledging they have been made aware of ADR alternatives. NJ courts have the authority to refer spouses to mediation prior to trial if there are disputed issues about custody and parenting time. New Jersey also requires parties to attend economic mediation in which a mediator donates two hours of their time for free.

Mediation is the most commonly used method of dispute resolution and is the least formal and adversarial style of ADR. A mediator's goal is not to make a final decision but to help guide the spouses toward a voluntary, mutual agreement. Mediation recognizes that agreements reached by joint efforts are more likely to be long lasting and minimize future conflict. Since both sides have invested in the decision, they are likely to maintain compliance.

Both parties provide the mediator with all relevant information regarding the issues in dispute. Meetings may be held with both spouses present, or a mediator may choose to meet with the parties separately at times. Mediators may offer advice or suggestions on how to resolve issues. Mediators cannot make decisions for spouses or force a party to accept a specific term.

Couples may initially attempt to mediate without lawyers present. However, if one spouse feels unable to express views on an issue or that specific rights will be better protected with an attorney present, legal counsel is typically allowed to attend. Mediation changes the role of an attorney to one more like a coach or advisor rather than a combatant in the courtroom.

Mediation is far less formal than a court proceeding, and usually takes place in an office. The mediation will often occur over several sessions. Parties are encouraged to state their wishes and feelings without formal evidence rules of trial getting in the way. In this way, both spouses are encouraged to play an active role to resolve major issues and reach a balanced settlement.

Benefits of mediation include resolving conflicts in a less adversarial setting, cost savings from not having attorneys prepare for trial and reducing the stress often experienced at trial. Sessions are confidential unlike an open trial. Most mediations ultimately end in settlement.

Mediation may be used to resolve any issue in dispute from child support and custody issues to alimony payments, division of property and distribution of debt. Mediation only works if both parties are open to compromise, willing to listen to each other and are fully forthcoming with all relevant information on the disputed issues. Mediation works best when spouses have minimal levels of hostility towards each other. If one party is unwilling to compromise, mediation will likely be a waste of time and money.

If mediation does not initially resolve disputes after a few sessions, parties may continue to negotiate on their own for weeks or even months and return to mediation later. If mediation resolves disputed issues, the mediator will prepare a letter outlining the agreement. The letter will be incorporated into the Marital Settlement Agreement.

Arbitration is a less frequently used form of ADR and works much like going to trial but with reduced formality. Spouses agree on an arbitrator unlike trial where parties must take the judge assigned to the case. Issues requiring resolution are presented, the spouses state their wishes and goals and the arbitrator makes a decision which is binding on the parties.

Arbitrators are often retired judges or family law attorneys. The venue for the arbitration is typically an office or conference room rather than a courtroom. Formal procedures for introducing evidence are relaxed.

Benefits of arbitration include having a jointly chosen decision maker focused solely on your case rather than juggling dozens of other cases that may fill a judge's weekly calendar. The process is often shorter than going to trial and results in reduced legal costs. The parties split the cost of hiring an arbitrator, but that expense is usually substantially less than paying two attorneys to prepare for and conduct a trial. Arbitration is private. Embarrassing or delicate issues which would be aired before a courtroom audience and made part of a public record at trial are confined to just the parties in the arbitration.

Among the drawbacks of arbitration is giving up decision making to a third party just as would happen at trial. When spouses fail to reach agreement on issues, they risk having someone else make the final decision which may please no one. In arbitration, unlike trial, the right of appeal is limited.

Even if spouses hope to resolve issues by ADR methods, consultation with or representation by an experienced family law attorney is a wise choice. If parties choose to mediate without attorneys present, spouses should still have counsel review any mediated agreement before signing to ensure the agreement is fair and clear. Peter Van Aulen is a trained mediator. He is certified as a matrimonial attorney by the New Jersey Supreme and has over twenty-five years of experience in divorce law. If you have any questions concerning alternative dispute resolution, call the Law Offices of Peter Van Aulen at 201-845-7400 today for consultation.