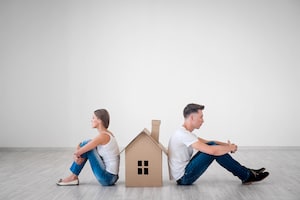 Whether states divide property based on the principle of equitable distribution or community property law, general guidelines are similar. Property acquired prior to marriage or after a specific date of separation is generally classified as a person's separate property. Assets acquired during the marriage, with a few exceptions, are considered community or marital property. Both property distribution schemes generally favor each spouse keeping his or her separate property. Community property states attempt to distribute marital assets equally while equitable distribution states strive for distributing those assets fairly but not necessarily equally.

Dividing much of the property when a marriage fails can be fairly straightforward. It is a relatively simple task to allocate kitchen appliances, books, linen, clothing and other personal effects. Difficulties arise when dealing with big ticket items such as the family home, businesses, and retirement accounts.

If the home was purchased after the marriage using funds from both spouses, the home will be considered community/marital property. The current value can be estimated by subtracting the outstanding mortgage amount from the estimated current selling price. Theoretically, each spouse would be entitled to half of the resulting amount.

If the house was owned by spouse A prior to marriage, the value of the home at the time of marriage must be compared to the current fair market value. The difference in values will likely be deemed community/marital property if spouse B contributed in any way to the increased value through expending personal effort or funds for improvements.

As for the long term, each spouse must consider if it's financially feasible for one of them to keep the home and make the mortgage payments. If one spouse plans to keep the residence, that person will need to buyout the other spouse's financial interest in the home. This may be accomplished by substituting other assets acceptable to the vacating spouse. Alternatively, the homeowner may give the spouse an interest-bearing lien against the property to be paid when the home sells. Provisions in the divorce decree can be added to require sale by a certain date or following an event such as the graduation of the youngest child from high school.

A sounder financial decision may result in selling the home immediately, dividing the proceeds and finding new residences. Selling requires cooperation between the spouses to set a price, choose a realtor, prepare the property and manage offers. When spouses are unable to work together, the court may set general guidelines for the sale and give one party the primary authority to sell the home.

The value of a business or professional practice started after marriage will most likely be considered community/marital property even if the business is owned and primarily operated by one spouse. If the business was started before marriage, any increased value occurring after the marriage began is often classified as marital property in New Jersey if the non-owner spouse contributed to the business's growth in some way. Obtaining an independent appraisal of the business is usually advised rather than relying on an accountant who handles the business bookkeeping or other financial affairs. Once the financial interest of each spouse is determined, the business could be sold and the proceeds split or the business owner will need to buyout the other spouse's interest.

It is not uncommon when both spouses have retirement benefits to simply agree that each spouse will keep his or her own benefits regardless of value. Otherwise, the value of retirement accounts must be determined. Any increase since the date of marriage will usually be considered community/marital property.

If a party is awarded a portion of their spouse's plan, such as a 401(k) account, he or she needs to rollover their distribution from their spouses 401(k) into his or her own retirement account to avoid incurring any tax penalty. Futher, some retirement plans require the retirement plan to be divided by a Qualified Domestic Relations Order (QDRO).

If a Spouse's retirement is a defined benefit plan (pension), an expert may be required to determine the value. Once value is established, Spouse B may choose to retain all rights to the account and buyout spouse A's share with other assets. Alternatively, one spouse may grant the other spouse an interest in the retirement account, but distribution of benefits would be deferred until they become payable in the future. Deferred payment requires a Qualified Domestic Relations QDRO to be signed by the court and provided to the retirement plan administrator. A lawyer or the plan administrator should be consulted to ensure the order is properly drafted.

Divorcing couples should always strive to reach agreement on property division. Courts usually approve agreed proposals. When spouses cannot agree, a judge must decide, and the decision may be unpopular with both parties. If you have any questions concerning property and divorce in New Jersey, call the Law Offices of Peter Van Aulen at 201-845-7400 for a free initial consultation.