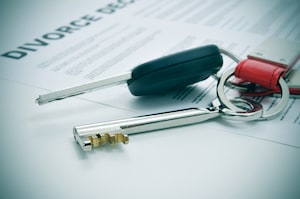 Dividing property acquired during a marriage can create contentious disputes. Ideally, spouses should try to resolve these issues themselves and determine the specific property and debts each will take. Courts will usually sign off on property agreements reached by the parties. When spouses cannot agree, a court will award property based on state law.

Nine states divide marital assets using a community property concept, while forty states divide property based on the concept of equitable distribution. Alaska uses both options. Property classified as separate property of a spouse is usually, but not always, awarded to that spouse under either method. The major difference applies to property acquired while married. In community property states, the stated intent is to split property obtained during the marriage equally. In equitable distribution states, a court will divide marital property in a manner which it considers fair, but not necessarily equal, to each party.

Both methods begin by classifying property as a separate or community asset.

Separate property generally includes all personal or real property owned by a person prior to marriage or after a clearly specified date of separation. It also includes gifts given solely to one spouse and property inherited by one spouse. Personal injury awards for pain and suffering are usually considered the separate property of the person receiving the funds as long as the money is not deposited in a joint account.

If the value of separate property increases during the marriage, the increase may be deemed community/marital property, especially if active efforts were made to achieve the increased value. A house purchased before marriage is the separate property of the owner. If, after marriage, active efforts are made to improve the property and increase the value, the owner's spouse may be entitled to a share of the increased value. The same may be true of a business started prior to marriage. If the value of the business increases after marriage due, in part, to efforts of the new spouse, that spouse may be able to claim 50% of the change in value.

To determine fairness, courts are usually guided by factors outlined in state law. For example, New Jersey requires a judge to look at a variety of factors including each spouse's financial condition, the age, and health of each spouse, the value of separate property retained by each, the amount of spousal maintenance awarded and the contribution each spouse made toward the acquisition of marital property.

Washington is a community property state, so the presumption is that separate property will stay with its owner and marital assets will be divided in roughly equal amounts. However, RCW 26.09.080 gives courts specific authority to dispose of property, either community or separate, as shall appear just and equitable considering relevant factors. Factors include the nature and extent of community and separate property, length of the marriage, and economic circumstances of each spouse. Other community property states list similar factors courts may apply to justify unequal property division.

Regardless of property division method used, fault or improper behavior by a spouse is usually not considered unless it relates directly to property. A spouse's affair is generally irrelevant. However, if the actions of one party led to property value loss, a court might assign one spouse a larger share of assets to make up for the loss of marital funds.

Spousal agreement on property distribution is almost always preferable to delegating decisions to the whims of a judge. Mediation during the divorce process is sometimes helpful. Prenuptial agreements outlining how property will be distributed in the event of a divorce should also be considered before marriage as one method to avoid potential future property disputes. When a substantial amount of property is involved, consultation with a lawyer may prove beneficial to ensure your rights are protected. If you have any questions about a divorce in New Jersey, call the Law Offices of Peter Van Aulen at 201-845-7400 for a free initial consultation.