Helping Clients With Divorce &
Family Law for More Than 25 Years. A Firm Focused On Divorce and Family Law.
Contact Us for a Consultation 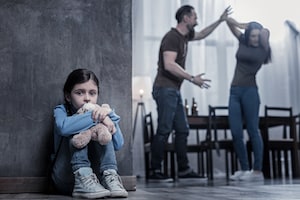 A domestic violence (DV) incident may be the event which triggers a decision to file for divorce. Conversely, filing for divorce may trigger a domestic violence incident against the filing spouse. DV allegations are far too common in divorce cases. Many accusations are legitimate, but false accusations intended to get back at the other spouse or gain an advantage in divorce proceedings are not uncommon.

A protection order prohibiting contact between spouses eliminates the option of directly working out divorce issues. Anyone accused of a domestic violence incident should hire an attorney whether the incident involves a criminal charge or the request for a restraining order. The attorney can communicate with the other spouse or the other spouse's attorney if one has been retained.

Communication between attorneys or between one spouse's attorney and the other spouse is generally not considered a violation of a restraining order. Similarly, serving legal paperwork on a spouse by a third party or appearing in a courtroom together for a scheduled hearing does not normally constitute a violation, although encounters outside the courtroom may lead to potential violations if the restrained spouse is not careful. Ideally, both spouses will retain attorneys who can work out divorce details without the spouses ever needing to come into actual contact.

In general, property distribution is not impacted by DV allegations. In community property states, marital assets and debts are to be divided equally and without regard to alleged misconduct. In equitable distribution states, marital property is to be divided fairly, but not necessarily equally, after examining all relevant factors which include age, health and income of each spouse. A spouse's misconduct may become relevant if that behavior resulted in reducing the value of marital property available for distribution.

Alimony or spousal maintenance is awarded in divorces after examining a variety of factors that include length of the marriage and each person's age, health, earning capacity and financial need. While misconduct is usually not included as a specific factor, alimony laws in many states give judges broad discretion to consider any issue they deem relevant in determining the amount and duration of alimony.

Allegations of domestic violence often have the greatest impact on child-related issues even if the children have not been direct victims of a DV incident. Courts must establish custody and visitation orders that are in the best interest of the child. While a temporary protection order may prevent contact between a parent and children for a short period, courts commonly want to include visitation provisions in long-term orders. The mechanics of exchanging custody for visitation require some creativity when parents are prohibited from having contact with each other.

There are several ways a custody exchange for visitation may occur without violating a restraining order. Children might be transported between residences by a third party. The restrained spouse might be allowed to pick up a child from school on Friday and return the child to school on Monday. A neutral supervisor may be designated as the point of exchange. Children would be delivered to the supervisor by one parent with pick-up by the other parent set for 30 minutes later. In general, courts are open to any workable suggestion by a parent to create a custody exchange procedure that protects the safety of all involved.

Long term custody issues can be significantly affected by allegations of domestic violence. A parent with a demonstrated history of perpetrating abuse is unlikely to obtain primary physical custody. Contact between the alleged abuser and children may be limited. Visitation may require a supervisor or be denied altogether until certain events take place such as completion of ordered counseling. This is one reason why it becomes urgent for anyone accused of abuse to quickly dispose of such allegations in divorce proceedings.

Dealing with divorce is often frustrating and emotional. Allegations of domestic violence complicate matters even more. For anyone accused of a DV incident the best approach is to hire an attorney and to fully comply with any restraining order even if in complete disagreement with the allegations supporting the order. Divorces involving DV allegations can be complicated, but with sound legal advice, patience and creativity even the most difficult issues can ultimately be resolved. If you questions concerning domestic violence and divorce, call the Law Offices Of Peter Van Aulen at (201) 845-7400 for a initial consultation.